What is a cult book?

We tried and failed to arrive at a definition: books often found in the pockets of murderers; books that you take very seriously when you are 17; books whose readers can be identified to all with the formula ” whacko”; books our children just won’t get…

Cult books include some of the most cringemaking collections of bilge ever collected between hard covers. But they also include many of the key texts of modern feminism; some of the best journalism and memoirs; some of the most entrancing and original novels in the canon.

Cult books are somehow, intangibly, different from simple bestsellers – though many of them are that. The Carpetbaggers was a bestseller; Zen and The Art of Motorcycle Maintenance was a cult. 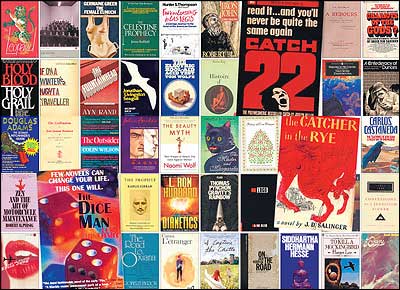 In compiling our list, we were looking for the sort of book that people wear like a leather jacket or carry around like a totem. The book that rewires your head: that turns you on to psychedelics; makes you want to move to Greece or conjures into being a character who becomes a permanent inhabitant of your mental flophouse.

Slaughterhouse-Five by Kurt Vonnegut (1969)
Sideways fantasy from the Diogenes of American letters, a comic sage who survived the firebombing of Dresden and various familial tragedies to work out his own unique brand of science-fictional satire. Like much of Vonnegut’s stuff, this is savage anger barely masked by urbane anthropological sarcasm. Very much the place to start.

The Alexandria Quartet by Lawrence Durrell (1957-60)
The great modern Baroque novel. Made it possible for the middle classes to embrace the Mediterranean. No such Alexandria ever existed, nor did the potboiler thriller plot of space/time exploration, Kaballa, sex, good food and drink (it came out during rationing) or philosophical enquiry. Some beautiful sentences, sure; but lots of them don’t make sense.

A Rebours by JK Huysmans (1884)
Plotless, morality-free salute to decadence. An individual based on its French author lounges about his luxurious home indulging in pursuits such as embedding gemstones in the shell of a tortoise until, loaded down, it expires. Dripping with Baudelairean ennui (and not a little dull itself), A Rebours was a bible for the Symbolists, Oscar Wilde and alienated creative types everywhere.

Baby and Child Care by Dr Benjamin Spock (1946)
Childcare experts go in and out of fashion, but Dr Benjamin Spock remains the daddy of them all. From his reassuring first sentence – “You know more than you think you do” – he revolutionised the way parents thought about their children, asserting the right to cuddle, comfort and follow your instincts. He also tells you how to deal with croup.

The Beauty Myth by Naomi Wolf (1991)
The woman who made feminism sexy by being gorgeous and shaving her legs also taught her readers to eat a hearty meal. This book argues that a cult of thinness has desexualised and disempowered women just when, after the acceptance of free love and the introduction of the contraceptive pill, the opposite should have happened. The most important feminist text of the past 20 years.

The Bell Jar by Sylvia Plath (1963)
In one of the original misery memoirs, Sylvia Plath delivered an intense, semiautobiographical story of growing up at a time when electroshock therapy was used to treat troubled young women. The narrator is a talented writer who arrives in New York with every opportunity before her, but buckles. The Bell Jar became a rallying call for a better understanding of mental illness, creativity and the impact on women of stifling social conventions. Plath killed herself a month after its publication.

Catch-22 by Joseph Heller (1961)
Bitterly bouncy military farce, responsible for inventing the dilemma to which it gave its name: you’re only excused war if you’re mad, but wanting an exemption argues that you must be sane. Literary history would be entirely different if Heller had followed his original intention and called it Catch-18: it was changed to avoid confusion with a Leon Uris book.

The Catcher in the Rye by JD Salinger (1951)
Ur-text of adolescent alienation, beloved of assassins, emos and everyone in between, Gordon Brown included. Complicated teen Holden Caulfield at large in the big city, working out his family and getting drunk. You’ve probably read it, be honest.

The Celestine Prophecy by James Redfield (1993)
Deep in the South American jungle an intrepid explorer is about to stumble on a sequence of ancient prophecies that could change our way of living, even save the world. If only we didn’t have to buy the other novels in that the series to find out what they were! For a similar effect on the cheap, rent an Indiana-Jonesalike film – Tomb Raider, say – and ask a hippy to whisper nonsense in your ear while you’re watching it.

The Dice Man by Luke Rhinehart (1971)
Blame a burgeoning mistrust of conventional psychiatry for the immediate impact of The Dice Man – a novel whose hero, a disillusioned psychiatrist, vows to make every decision of his life according to the roll of a die. As one might have expected from the times, chance sends him into violence and anarchy, which also explains the book’s enduring appeal.

Chariots of the Gods: Was God An Astronaut? by Erich Von Däniken (1968)
Those Easter Island things, they’re blokes wearing space suits, aren’t they? Er, no. Hugely influential work of mad-eyed fabricated Arch & Anth, responsible for decades of pub pseudoscience as well as for splendid stuff such as The X-Files. Increasingly common at jumble sales these days, though Von Däniken happily got another 25 books out of the idea.

One response to “The 50 Best Cult Books”