The Tigris Runs Black with the Ink of Scholars 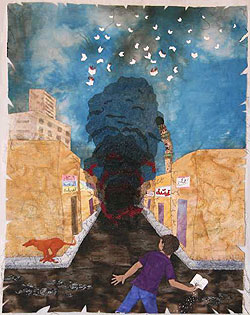 The brutalities of the Iraq war accumulate so fast it is difficult to keep track. But in this season of fifth- year anniversaries, one largely forgotten crime demands to be recalled, in part because it relates directly to the politics of memory itself. Five years ago this week, US troops stood by as looters sacked the Iraq National Library and Archives – one of the oldest and most used in the world. In Arab countries the old expression was “Cairo writes, Beirut publishes, and Baghdad reads.”

American troops were under orders not to intervene. Library staff who requested protection from the GI’s were told, “We are soldiers, not policemen”. American military orders did, however, extend to guarding the Ministry of Oil, and the headquarters of the Mukhabarat, Saddam Hussein’s secret police.

The selective passivity of US forces was not only ethically questionable, but also a violation of international law. The Hague Convention for the Protection of Cultural Property in the Event of Armed Conflict (1954) makes clear that libraries should not only be spared attack in wartime but also actively protected.

Despite the sack of a major cultural institution and the collapse of the society around it, the library struggles on, continuing a long tradition of resurrection from the ashes of war. The world’s first library was located in Mosul, in Northern Iraq. It was built in the 7th century BCE and produced the first known catalog in history. In 1927 a British archeological team unearthed it and, for “purposes of preservation”, carried off many of its artifacts – including the oldest known copy of The Epic of Gilgamesh, the first great work of world literature.

Iraq’s intellectual golden era came later and coincided with the Abbasid Dynasty ( 750-1258 ) whose capital was established at Baghdad. In 832, the construction of the Byat al-Hikma (House of Wisdom) established the new capital as an unrivaled center of scholarship and intellectual exchange.

The tradition of research there brought advances in astronomy, optics, physics and mathematics. The father of algebra, Al-Khawarizmii, labored among its scrolls. It was here that many of the Greek and Latin texts we accept as the foundation of Western thought were translated, catalogued and preserved. And it was from Baghdad that these works would eventually make their way to medieval Europe and help lift that continent from its benighted, post-Roman intellectual torpor.

In 1258, the Mongols descended on Baghdad and emptied the libraries into the Tigris, ending the city’s scholarly preeminence enjoyed for nearly 500 years. “Hence the legend developed,” as one scholar wrote, “that the river ran black from the ink of the countless texts lost in this manner, while the streets ran red with the blood of the city’s slaughtered inhabitants.”

The current Director of Iraq’s National Library and Archive, Dr. Saad Eskander, estimates that over three days, beginning on April 11, 2003, as many as “60 percent of the Ottoman and Royal Hashemite era documents were lost as well as the bulk of the Ba’ath era documents…. [and] approximately 25 percent of the book collections were looted or burned.” Other Iraqi manuscript collections and university libraries suffered similar fates.

Since then, Iraqis have once again tried to rebuild their library. The occupying powers have played along, but like so much about the Iraq War, their effort has been marked by ineptitude, hypocrisy and a cruel disregard for Iraqi people and culture.

Early in the occupation, L. Paul Bremer’s Coalition Provisional Authority (CPA), demonstrated an unwillingness to provide the basic funds necessary for the reconstruction of Iraq’s educational and informational infrastructure. Dr. Rene Teijgeler, senior consultant for Culture for the Iraqi Reconstruction Management office at the American Embassy in Baghdad, left his position in February of 2005, not having “the supplies of ready cash that could be used to acquire something as simple as bookshelves.” His position was left empty.

So the library staff have looked elsewhere, occasionally finding pieces of the old collection for sale there on Al Mutanabi street, home to Baghdad’s booksellers.

Many dedicated people have offered important solidarity. In Florence, the city government underwrote construction of a conservation lab. The Czech government funded the training of Iraqi archivists. With the exception of invaluable training sessions organized by private educational institutions such as Harvard University, American support has been limited to a relatively small number of individual scholars, a few dedicated nonprofit agencies, nominal USAID support and the cooperation of a handful of private
corporations. The British National Library has provided recently published English-language social science texts and donated microfilm copies of its colonial administrative records from its last occupation of Iraq. But the replacement of physical documents largely ends here.

It would be unfair and frankly absurd to blame American librarians and their shrinking budgets, rising legal costs and increasingly costly dependence on proprietary databases for the state of Iraq’s infrastructure. But the increasingly unstable position of American libraries is actually part of the same logic that produced that war. The disdain for cultural institutions does not stop at the border–bombs there, budget cuts here.

Excerpted from The Nation