The Inner Child of William Steig

In the exhibition catalog: From The New Yorker to Shrek: The Art of William Steig, at the Jewish Museum, the artist’s daughter, Maggie Steig, recalls a game her father used to play with her: “What would you rather be?

”Would you rather be a tree (sturdy, long-lived, a home for birds) or a flower (a short but exciting life, carried in weddings, pressed into books by princesses)?

What would you rather be, Maggie’s father would also ask, “a knee or an elbow?” Or more adventurously: “A pinch of pus or a pile of puke? A scab or a wart?”

Children may know William Steig as the creator of Shrek, but their grandparents can trace the ornery green ogre’s roots through a body of children’s books, New Yorker cartoons and drawings dating back to the Depression.

The child of immigrants, Steig was fortunate to come of age at an auspicious time for cartoonists. An entire industry of penny weeklies was devoted to boosting morale during the Depression and World War II. He was 23 when he began contributing to The New Yorker in 1930, and the magazine continued to publish his drawings, including several covers, until his death in 2003, at 95.

Brimming with scenes of domestic discord and references to Jewish immigrant life in the tenements, Mr. Steig’s early cartoons and drawings were a radical departure from the upper-crust dinner-party gags of previous New Yorker cartoons. 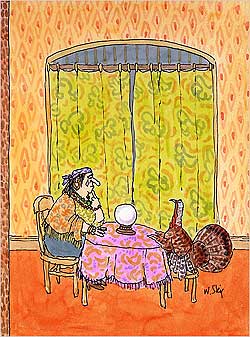 Steig also made a body of work exploring psychological states, some of which were collected in About People: A Book of Symbolic Drawings (1939). He produced deft images that were considered too serious for The New Yorker of the time, distilling amorphous mental conditions into precisely drawn caricatures. In Melancholia (1939) a woman lies on her belly in a child’s wooden cradle, too large for its enclosure, leaning on her crossed arms, bleakly staring into the distance. Our Marriage Will Be Different (1947) proclaims a cartoon showing a couple heading offstage after a song-and-dance-number; we know the show will be over. Harold Ross, The New Yorker’s editor then, called these works “too personal and not funny enough,” but they caught on with devotees of psychoanalysis.

The novelist Henry Miller put it best, in a letter to Steig that is on display at the museum: “You give a sort of geography of the emotional reactions of man, his tiny little globe built around a microscopic ego.”

Steig’s overwhelming sense of isolation found a more resonant expression in a remarkable series of children’s books he started to produce in the late 1960s. Most have become classics, with grown-up ethical and philosophical dilemmas couched in the antics of lovable farm animals. In these works Steig’s sensitive, wavering line finds a parallel in his expressive writing. 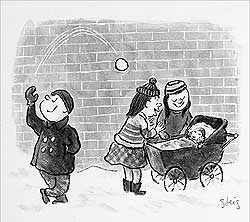 The street life of friends inspired his early series of Small Fry cartoons, in which snowball fights, sibling rivalry and fantasies of glory turned cartooning into a form of emotional documentation: here is how children play, tease, laugh, dream.

The children’s books became a way for Steig to combine and reconcile these ideas and sentiments. Animals are the main characters because they are literally fabulous, condensations of personal traits, elemental even to a child. When we read that Doctor De Soto “outfoxed the fox,” we know exactly what that means and why the dentist-mouse was right to mistrust the animal. Such villainy is part of the natural order.

Exaggeration often makes these tales most affecting. The more bizarre the artifice and the more ornate the language, the more potent they become. A ring of power? That’s the stuff of fiction and fantasy. But a talking bone! Who could have imagined such a thing? And what powers might it possess? “I didn’t know you could do magic!” Pearl the Pig breathlessly tells the bone after it rescues her, as if there had been no previous sign in the bone’s use of German, its imitation of trumpets, or in the sounds of its sneezes.

And of course the magic and the villainy are often both close to home, found in pebbles, bones and home-brewed potions, in ordinary animals and simple yearnings.

We are never fully sure of that adult world, except that it will have both trees and flowers, elbows and knees, scabs and warts. And unpredictable pleasures. Pearl the Pig, restored from the clutches of the fox by the magic bone, brings the bone home and the “two chatterboxes” are often whispering or singing together. The bone joins her family.

“And they all had music whenever they wanted it,” Steig concludes, “and sometimes even when they didn’t.”

William Steig at the Jewish Museum

One response to “The Inner Child of William Steig”