From Baghdad With Love

A Marine, the War, and a Dog Named Lava

During the first week of the battle for Fallujah, Marines securing an abandoned warehouse heard a strange sound. What they found was a “ball of fur not much bigger than a grenade.” The battalion adopted the puppy, and this is the inspiring story of their struggle to keep him alive and ship him back to the States.

An excerpt from the book, by Jay Kopelman:

I heard someone say once that guilty people live violent lives. At the time, I didn’t really get it, but if what they meant was the way guilt waits in ambush, traps your well-trained sense of control and then tortures you into confessions you’d just as soon not make, I now understand.

I mean, I guess it’s guilt. That’s one part of my confession. Maybe it’s just what the therapist calls post-traumatic stress, even though I’ve only been home for a week, or maybe some chemical imbalance brought on recently by any number of issues or maybe just residue from the sleeping pills still floating through my blood stream, but hell, what else besides guilt has the capacity to beach land so much fear?

Anxiety, maybe. Anxiety assumes less culpability, implies less of an offense, offers more of an excuse. Or compulsiveness. Along with nightmares, flashbacks, moodiness, alcoholism and depression, they said something about a compulsive disorder that could send your brain cells scurrying into all sorts of witless directions, and between checking incoming email, praying for the phone to ring and counting the paces between one wall and the next, it seems entirely plausible. 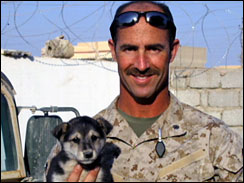 But then, so did getting Lava out of Iraq in the first place, and how impeachable was that offense after Allah, Jehovah, Jesus, Lady Luck and Santa Clause made it pretty clear it wasn’t on their list of things to do this year?

I mean, what else besides guilt would drive a man to do what I did back there? Obsession, perhaps, but that implies a lifetime of prescription slips from the therapist and besides, not everyone involved in the rescue—the Marines, the journalists, the Iraqis, the personal security guys — could be crazy. Maybe they could. Nothing seems right-side-up anymore and hasn’t for some time now.

I think the pacing is what’s getting to me. The back-and-forth unearths all kinds of radioactive crap I don’t want hanging around. Like a lot of faces. Weird, dreamy faces. Faces of stray dogs I fed at the Syrian border. Faces of embedded journalists in Fallujah with terror dripping down them like sweat. Faces of Iraqis smashed into the street like ripe banana meat under your boot and the question of whether a face is really a face if there’s no one home behind it.

Mostly, though, faces of people who risked their lives to try and help save Lava. They bother me the most, and that’s the second part of the confession. I think we all let the mangy, little flea-bitten refugee get to us—as if compassion was some sinister germ intent on infection—and now that we’ve all been bitten by the contagion, now that it comes down to the end, now that all other roads of escape are closed for good, I feel responsible to them to make sure Lava gets out alive.

Maybe the little shit is dead already. Or maybe they didn’t make it through and he’s now lost on the streets of Baghdad wondering where everybody went.

There were so many times when I figured the best thing for the little guy was to just shoot him in the head—yeah, yeah, I know how that sounds—but really, I mean I couldn’t stand the thought of him joining the other stray dogs who hobbled around on three legs looking for bodies to eat. I remember after the initial bombing in Fallujah, there were dead Iraqis all over the place and seeing dogs feasting on the remains and thinking this must be the only place on Earth where the dead nourished the living and how screwed up that seemed. Now I pray that if Lava doesn’t make it through, he’ll find a body somewhere in Baghdad to keep him alive for just one more day.

Which brings me to the third part of the confession: No matter how bad things get, it’s still better to be alive. And I want Lava to stay alive. I want to know he’s breathing and leaping after dust balls and chasing imaginary enemies in his sleep. I want him to be alive, because then there’s still hope that he’ll make it here to California and get to be an American dog who runs on the beach and chases the mailman instead of strangers with guns. I want him to be alive almost more than anything I can think of.

The fourth part of the confession is that when the phone finally rings, I don’t want to answer it…

A Soldier’s Gift: Sgt. Peter Neesley and his dogs, Mama and Boris

5 responses to “From Baghdad With Love”